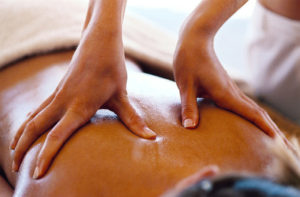 Most Back Pain is caused by minor damage to ligaments and muscles in the back. Back pain is tension, stiffness, aching or pain that most commonly originates from muscles, vertebrae or joints of the back. Back pain is a common ailment that is likely to have affected you at some point during your life. Repetitive movements such as sitting at a computer, driving or overuse of your muscles through physical work or exercise, can cause them to become tight, restricting the amount of blood flow to these areas. This deprives yhour muscles of essential nutrients and oxygen, which are required for healthy tissue and movement. Lactic acid builds up in the muscle fibres causing pain. There are a multitude of different causes, ranging from bending awkwardly to simply being overweight. It is equally likely to be caused by lifting heavy weights.

Back pain is one of the most common complaints of the UK workforce, resulting in approximately 15 million missed days at work per year!

It is estimated that four in five people being affected by it at some point in their lives. It mostly affects people between the ages of 35 and 50 and can last for days, months or even years. Pain in the back can be triggered by a variety of different factors such as poor posture or sitting incorrectly, awkward bending or lifting, or even sports injuries. However in most cases, the trigger is not what causes back pain, it merely reveals the presence of an existing condition in the back.

Remedial which is a deep, firm massage aids the release of the knotted fibres allowing the blood to flow more freely taking the lactic acid away, so reducing your pain.